skip to main | skip to sidebar

Is Blogging About Code Worthwhile?

When I made my last blog post over a year ago, I stopped because I'd grown disillusioned. What was I actually adding to the worldwide conversation? Given that anyone can set up a blog with relative ease and give their opinion on anything, was anything that I was saying valuable?

I'd started the blog under the belief that, well, if I can't find out how to easily do something online, then I'll make a post about it because someone is sure to stumble on to it eventually. Through Google Analytics though, this is clearly bollocks, because the post with the largest hits, Some SSIS pointers, did so not because of its content but because people were searching for pointers in SSIS, when I was referring to "hints" not the programming concept. It's difficult to get your blog indexed correctly it seems.

If you're one of the, and I use this term with disdain, "rockstar" developers - the Hanselmans, Atwoods and the like, where you have the the traffic, you pretty much get to say what you like, the lesser mortals follow, the higher mortals challenge and some interesting content is the result.

On a small blog like this, where the interaction is non-existent regardless of how useful the content is, I now believe you're better served as an author by spending your time starting a conversation on a site like StackOverflow or Programmers.StackExchange on the topic you're looking to cover. The result is the same if not better - a unique piece of content is created with a far greater chance of it being used by someone who needs it and probably with a better answer too given the community interaction.

So, while I think I'll up the blogging to a broader range of topics, I'm going to shift code related blogging, questions and discussions to a community site. Unless you're a "rockstar" I reckon this is worth considering for your blog too.
Posted by Richard LT at 1:33 AM 1 comment:

Any developer working on a client system understands the pressures to deliver. There's your scope, time, cost, quality and effort considerations hanging over your head permanently. You also feel as if you're the only real contributor to the team, always clocking out the latest (and long after the analysts have gone home).

What makes it worse is you often find, particularly during your first release or demo to the users, that instead of a feeling of reward, you leave with a feeling of "this is not worth the effort". This stems from the reaction of your users or clients - because instead of admiring your perfectly working functionality, they focus on how it looks. "Why is that button off-centre?" becomes a 10 minute discussion, rather than admiration for the effort on the mind bogglingly highly optimised and complex financial calculation you managed to pull off.

This comes, I believe, from a fundamental misunderstanding between users and developers. To a user, the feel of the system is top of mind. It's easy for them to see visual progress, and non technical people often attribute looks with excellence, regardless of whether something works or not. The fact that your back end has a perfect architecture means nothing to them. If it looks like crud, they'll think the whole thing is crud.

I've personally tried a few analogies to get users to understand the concept that you need the foundation correct before you can make it look pretty. The one that has worked well is an analogy with building a house, and goes: 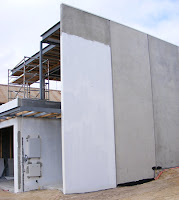 When you build a house, do you dig the foundation, lay a brick, cement it, plaster it, and paint it before adding the next brick? No, you complete the house first, and then you make it look pretty. Otherwise your house won't be very stable, or pretty.

And software is the same. Get the architecture and functionality right first, and then focus on the interface.

IE7 cannot be installed on Windows 7. If you have a bug that needs to be testing on IE7, do the following:

Apache and php on Windows 7 x64

I've been having some joy this evening getting these two to configure correctly. Firstly, I downloaded the following files:

The requested operation has failed!

And here I thought Microsoft gave unhelpful error messages. Some time Googling later, I found this post which seemed to be much the same issue.

So I uninstalled the php msi, downloaded the same file in zip format, and extracted to the same folder (in my case, C:\PHP). Restarted Apache and there were no issues.

Huzzah! Windows 7 has finally been installed. It's been a comedy of errors for me, but I'm still going to put most of the blame on Microsoft.

I resolved my power problem by throwing money at it, by purchasing a Corsair VX 550W PSU, approximately a month ago. The PSU is great and I've seen a much stabler machine. So why didn't I have Windows 7 installed immediately after that?

I tried, I really did. However, the DVD was corrupt and then I lost the image in order to make another one. Besides, that image seemed dodgy, so I asked a friend to download a proper image from TechNet. I have a subscription, but no bandwidth. He tried, he really did. It took three attempts to download as the connection kept being interrupted. And did TechNet resume from where the download was before the interruptions? You know the answer.

Anyhow, I finally got hold of that image yesterday and here we are. All futurised.

I've also decided to give Panda's Cloud Antivirus a try. I'll report on that shortly...

Posted by Richard LT at 6:18 PM No comments:

Having failed hopelessly in my attempts to setup Windows 7 (all blame to be directed at my pathetic PSU), I thought I'd go with the much simpler to install and review Office 2010 Beta. The beta is available as a free download here.

Installation
This was fairly slow, and Office has ramped up in size to use 2.34GB in total. Not too bad, but on my work laptop I'm a little short on space. They've made it really easy this time to actually install along side your existing (read: safe) version of Office, or upgrade it if you want to. Seriously, don't upgrade yet, its a beta for a reason. The installation has the awesome affect of making your task bar disappear. Kindly, it is returned after about 5 minutes. I hope that one's on the issue list.

The install appeared to finish, so I tried to access the programs. However it had actually not finished and got quite grumpy.

Word, homey
Once it had finished being grumpy it finally asked me to be restarted. Begrudgingly I obliged. On finally excitedly opening up Word, the splash screen appears and *crash*. The "Send to Bluetooth" feature crashed on load. On second opening of Word, it asked me if I wanted to disable the feature, which is a significant improvement for Microsoft over their "keep trying, its you thats the problem not us" approach.

For some unknown stupid reason, Microsoft have chosen to set the default appearance to the "silver" theme. This has the effect of making Word look like Open Office. Now, I'm all for a bit of open source, in fact I hugely respect it, and understand when it looks like a Romanian gypsy's dog's arse. But I dont expect the same of proprietary software. Not least of all Word 2010. Changing to the "blue" theme really helps with this. Microsoft, pick a new default!

So, as you can see they've gotten rid of that ridiculous round windows button, and brought back a familiar favourite, File. They've spent some time considerably improving the access to the features under file, which is a big plus for me due to work requirements.

Out-WTF-look
Outlook very kindly changed itself to be the default mail client. Now I would love and have begged to be able to use Outlook and Exchange, but until further notice I'm stuck with Lotus Notes. Microsoft, don't change the default when I don't ask you to. Naughty.

Excel at what exactly?
Other than the additional of File, excel remains seeminly largely unchanged. The marketing blurb speaks of new conditional formatting. New? Seriously new? The writer must be new to the marketing department. Perhaps they should open up Excel 2007 and have a look closely, seems pretty much the same to me.

Roundup
Other than some bug fixes and behind the scene's work, this is pretty much a bog standard release of Office. It's an uglier version of 2007, with minor improvements. However, there's one small thing about this beta for which Microsoft deserves a bravo (or rather a cry of "finally!"):

The two smiley's represent a feedback capturing system. If you like something that you see in the new office, click the happy smiley, and a screen shot of what it is you like is taken. Add some comments about why you like, and send to Microsoft. Ofcourse the same applies to stuff you don't. Three cheers to finally garnering user feedback in a friendly way. Huzzah!

I've just eagerly got hold my copy of Windows 7 Ultimate (x64) and key from TechNet and now I'm going through the fun of trying to install it. I thought this was supposed to be a simpler process than Vista, but so far it's been hell.

First problem:
It looks like my Asus P5K SE/EPU motherboard drivers haven't been updated for Windows 7. So I'll be off to Intel to get the chipset drivers then...

Second problem:
It took forever to actually get to the setup screen. I'd been told this is a common issue, so I wasn't too concerned. When it eventually got here, I chose to do a custom install as I wanted to format the partition (leaving no trace of Windows 6, so that Windows 6.1, sorry 7 :P, wasn't held back by it in any way). Like Vista, you've only got the option to do the ridiculously inadequate lightning quick format. It does that, moves on with the setup (while taking forever to get to the next screen). Eventually, at about 15% into it, I'm told that something's corrupt and good day to you sir.

On second attempt, the same happens. Getting some advice, I was told to use a familiar friend to format properly. What friend was this I hear you ask... 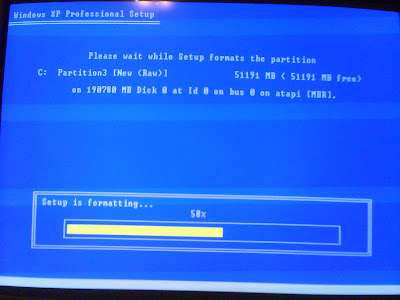 Third problem: And this one I can't gleefully place on Microsoft. My admittedly pathetic 400W power supply has finally caved in, as the nVidia 8800 Ultra is killing it, causing it to randomly restart all during the install. Now, as I'd like to keep my HDD, my Windows 7 saga will have to wait until I get a new psu...

Posted by Richard LT at 8:35 PM No comments:

Richard LT
Cape Town, South Africa
I'm a developer with a passion for turning an abstract problem into a working system. I'm really interested in the areas of HCI, database management systems, software methodology and practices and the development team's working environment.
Naturally, any views I express on my blog are my own and not those of my employer.